Riding In The Cold 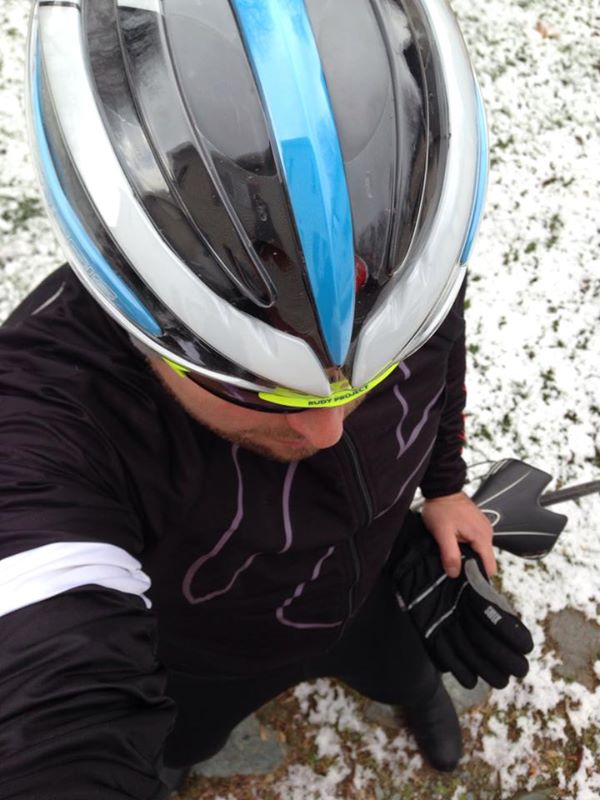 OK, so I haven’t been riding outside enough recently.

There are some good reasons (like getting over pneumonia) and not so good reasons (being lazy about switching the cross rig back to a double ring up front) but generally I’ve just been riding inside.  Yeah, and it’s not awesome, so I’m looking to change that.  I have a ton of winter gear, and the setup I tend to run these days generally keeps me pretty comfortable.  Here’s what I’ve been doing.

Feet- this is the big one for me, and usually what gets insufferably cold.  I’ve gone a little crazy sometimes, but I’ve started to run one to three pairs of shoe covers.  My super nice Craft Nemo booties tore past the zipper after a relatively short lifespan so I’m using a mix of older Bontrager and Nike options.  I’ll often use the sock type and the heavy neoprene type together, sometimes with the neoprene toe covers as well.      I’ve also used some insulated Superfeet footbeds and small in-shoe warmers.  The warmers are pretty small, and the footbeds help add some insulation to the sole where the booties aren’t adding any warmth.  Socks are just a single pair of the DeFeet Wooleator- not the Woolie Boolie.  Thick socks restrict circulation so I pretty much always use the same socks under 60 degrees.  This is all easier with road shoes, but you can get similar results with mtb shoes if you size up the shoe covers and are willing to fight to get them on.  In the past I’ve covered shoe vents with duct tape which adds a surprising amount of warmth, but I’d only ever recommend that for old shoes that you would otherwise retire.

Legs- if it’s below freezing I’ll use windproof bib tights.  I have two pairs- one from Bontrager and one from Craft, and they’re generally both good on the road if it’s really cold but way too hot if it’s above freezing.  If it’s just above freezing to say 50 degrees the best combo I’ve found is the Ibex wool bib shorts and matching leg warmers.  The shorts are super comfortable and notably warmer than normal bib shorts and the leg warmers are absolutely awesome.  The Ibex bibs are also great under the aforementioned windproof tights.

Core- always a wool baselayer, and the debate is only whether it should be short or long sleeve.  Generally I go with the long sleeve and a long sleeve thermal jersey over it, so the question comes down to jacket.  If it’s below freezing the windproof jacket comes out to match the tights, otherwise I may wear the lightly insulated model shown in the picture or one of the lightweight wind shell variety.  The jersey pockets get a lot of use as my jackets may or may not have any decent pockets.

Head- I’ve really been fond of the Lazer rain/aero cover offered for their Genesis and Helium helmets.  It adds some warmth and weather protection while still allowing some air flow to keep the rain forest effect at bay.  Under that it’s a wool cap- Ibex’s Coppi or Meru, or sometimes one of Swix’s wool options if I’d like something heavier.

Hands- if I get the core and head warm then my hands are usually fine.  In fact I’ll often go without gloves if it’s over 45 degrees, so I’m not the guy to ask about hand comfort in cold weather.  And I hate gloves in general, but I’ve had awesome luck with the Craft Neoprene glove.  They don’t seem like they should be warm but I’ve worn them down to 20 degrees with no issue, and they’re too hot to wear over 35, but see above disclaimer about hand warmth.

I also like to carry a large zip lock bag with another pair of gloves, a hat, and a packable windshell.  It’s sort of a small insurance package, but I go by the motto of always having enough food and clothing, and in cold conditions that goes double.  The bag keeps it dry from road spray but also from sweat- nothing worse than putting on a soaking wet hat or pair of gloves that’s supposed to be warm and dry.

For tools I carry a Crank Bros M-17, two tubes, a tire lever, and a patch kit.  Cartidge CO2 doesn’t work below 40 degrees, but I use the frame pump on the road bike anyway.

Food wise it depends on my mood, but I’m really liking pineapple rings for an on-bike snack and Powerbar Performance in the water bottles.  I’ll also have a Coke for a mid-ride energy boost (well-documented).

So there you have it- go on, get out there.