MTBVT Does the Vermont Overland Rally 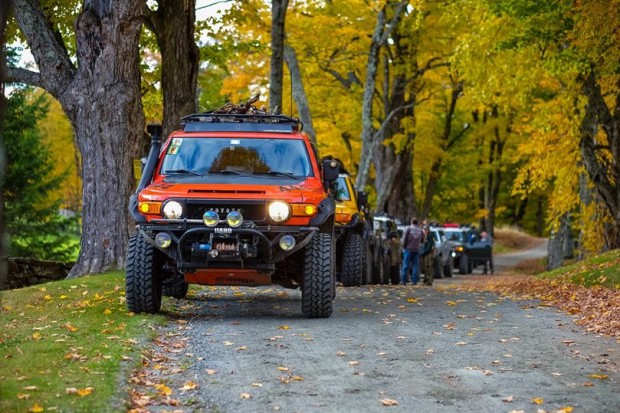 It didn’t take much convincing.

A couple years ago my good friend Dan got a completely decked out and off road worthy Toyota FJ Cruiser, and unlike most people who buy these he actually takes it off of the pavement. 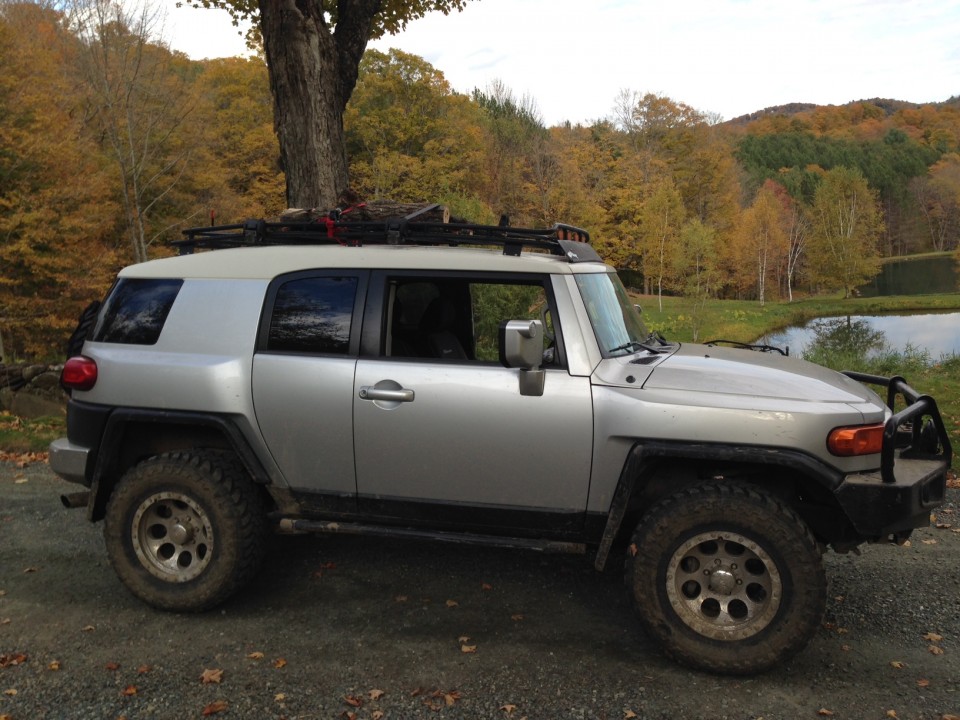 You may recall this post from last year about our adventures with it on some local Class IV roads.  Since then I’ve been obsessed with trucks and on a couple of occassions have seriously contemplating getting rid of my beloved Speed3.  I know, I know, realistically I’d keep the Speed3 and just get a truck, but at the moment one vehicle is plenty.

Since that trek we’d talked about going out again, so when he asked me to co-pilot at the Vermont Overland Rally earlier this month I jumped on it.  I guess to be fair I jumped as far as I could with the short leash I’d been given from my job.  With a massive, two year project launching just two weeks prior I had some support responsibilities that meant I had to be within cell coverage and ready access of my laptop- both of which are massive buzzkills when you’re participating in an activity so actively engaged in getting off the grid.

The 4×4 set, like most of us, has subsets within the larger group where the smaller groups are defined largely by the vehicle one owns.  Jeep guys stick with Jeep guys, Rover guys stick with Rover guys, and so on.  Dan’s a Toyota guy, so we stuck with the other Toyota guys, or specifically the FJ guys.  There are other subgroups for the Land Cruiser and 4 Runner guys.

In a lot of way s that made sense- you can see how other people use the same tool, and there’s something to be said to be in a group where everyone’s tools have the same capabilities.  It also looks badass in group pictures. 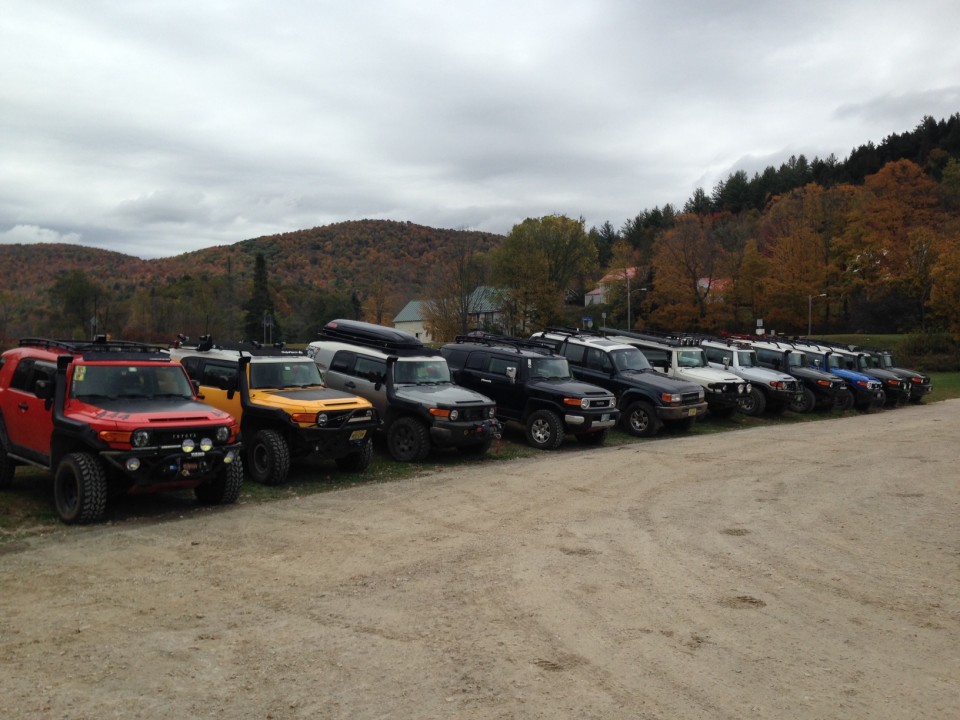 And before you think that’s somehow a dick move I’ll remind you how little intermixing there is between the completely arbitrary cliques within mountain biking when we all do basically the same shit on the same trails with varying levels of flair and ironic apparel choices.

I knew I had to pack for the Rally, and that meant getting together some of my favorite things- whiskey, one of my refurbished axes, one of my new black walnut cutting boards, and a sleeping bag.  I brought other stuff too, but it didn’t look cool in the picture. 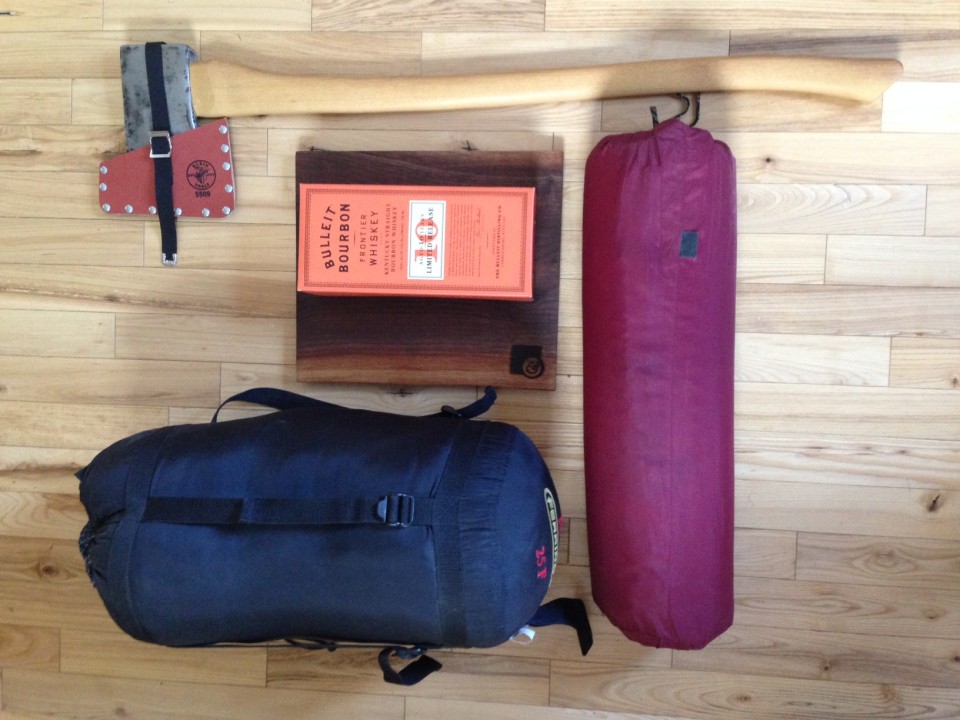 While most of the participants arrived on Thursday evening I got there Friday after work, and after fumbling around in the dark in the parking lot I found Dan and my adopted family for the weekend, the FJ Northeasters crew.  The fire was going, drinks were being poured and people were  swapping war stories about the day’s adventures out on the trail.  Dan’s muffler was among the casualties of the day and after a lengthy trailside  repair they had it going again, albeit with minimal muffling. 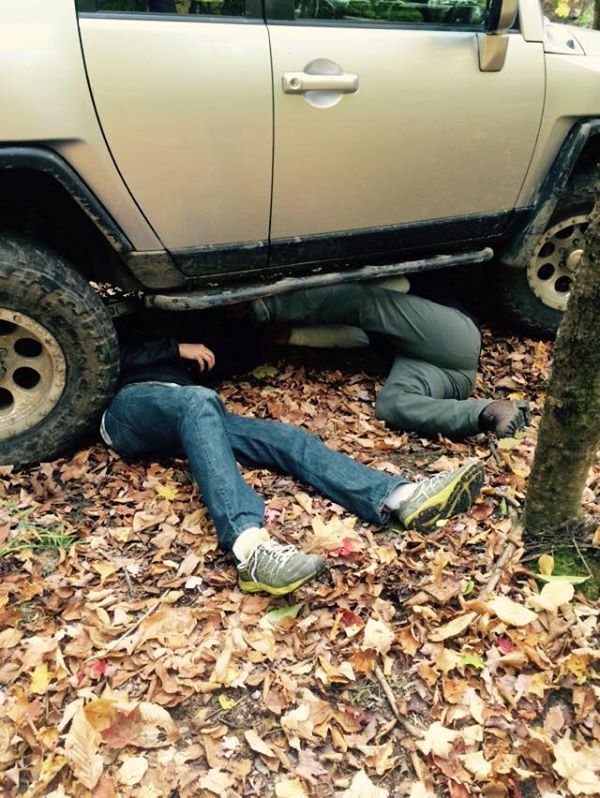 Standing around the fire and sipping on the whiskey I brought I slowly made my way around the group and made some small talk.  The crew was welcoming and was clearly interested in me getting completely inebriated; they felt I was unable to complete that task on my own.  I kept it in check, or so I thought, and ended up talking with some interlopers from the Xterra crew for a few minutes.

What happened in those few minutes is somewhat of a blur, but basically I mentioned I was considering getting an Xterra and from that the semi-solicited advice started flowing.  It was something like “hey, you need the newest, most badass version out there, it’s cheaper in the long run” and as I tried to make that math work in my head somebody fell into the fire and I decided it was time to get some sleep.

Dan has made a project out of retrofitting an older military trailer into a rolling tow-behind tent/storage locker/ground control/liquor cabinet so we were pretty well set for supplies and a high & dry place to sleep.

Saturday morning we milled around the camp a bit, assessed our hangovers and made breakfast.  With minimal fanfare we rolled out and headed north to the dirt roads and trails of the Bridgewater area.  Being part of this unofficial convoy was cool- and people  we drove past definitely noticed.  Being co-pilot I made waving to said people my first priority. 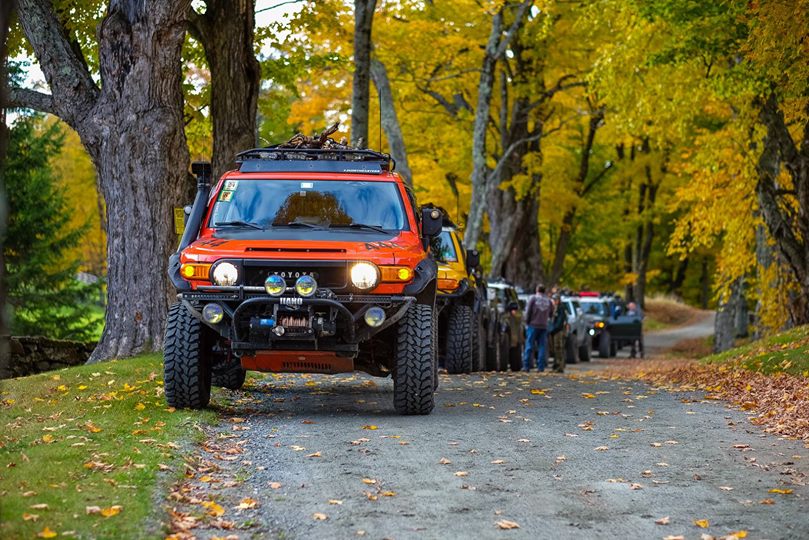 As we got more and more into the pure off road terrain I seemed to go from feeling OK to feeling absolutely terrible, then found a quiet spot behind a maple tree to puke.

During our stop one of the rigs was turned off, then wouldn’t start for a while, then the guys were able to use the old hit the starter with a hammer/brick/stick/mallet/axe/beanie baby trick to make it go.  With it running we worked our way through progressively more aggressive terrain and dropped out onto some pristine dirt roads. 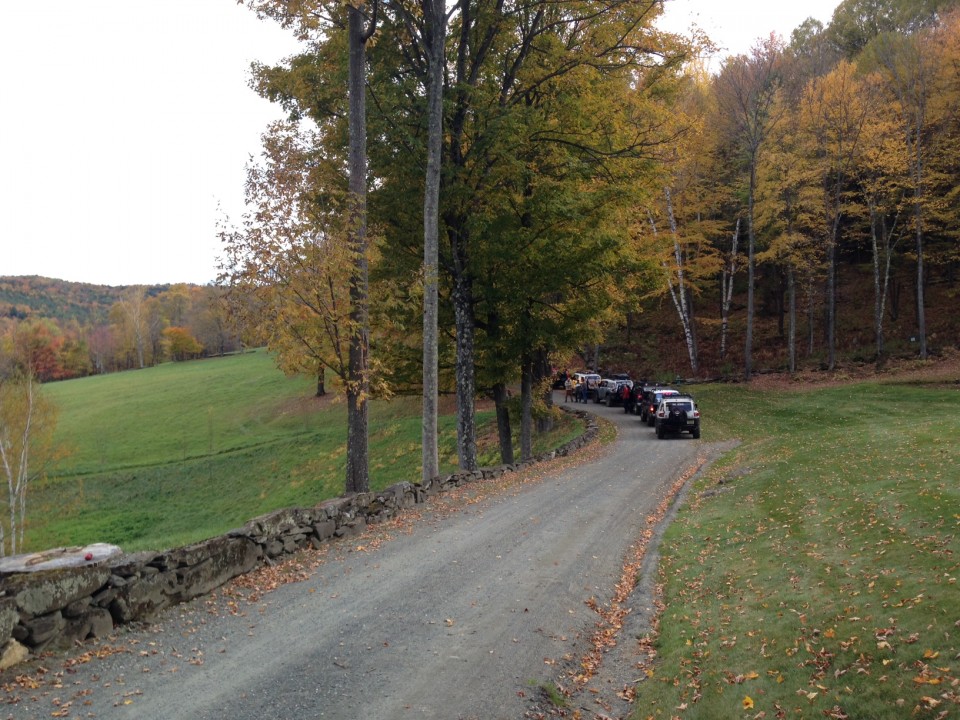 Overlanding is by nature somewhat different from pure off roading.  Off roading is like a lift-assisted mountain bike ride- it’s a relatively short, focused attack on aggressive terrain in a vehicle that’s usually highly modified for the task.  Overlanding has many of the technical driving challenges of off roading, but is basically motor-assisted trail exploration and remote car camping, or more about the journey, the adventure, and the scenery rather than just getting after it on some super hobbly terrain features.

OK, there were still some hobbly terrain features.

After a lunch stop we made our way back out to the dirt roads through some truly amazing parts of the state that I’ve never seen. 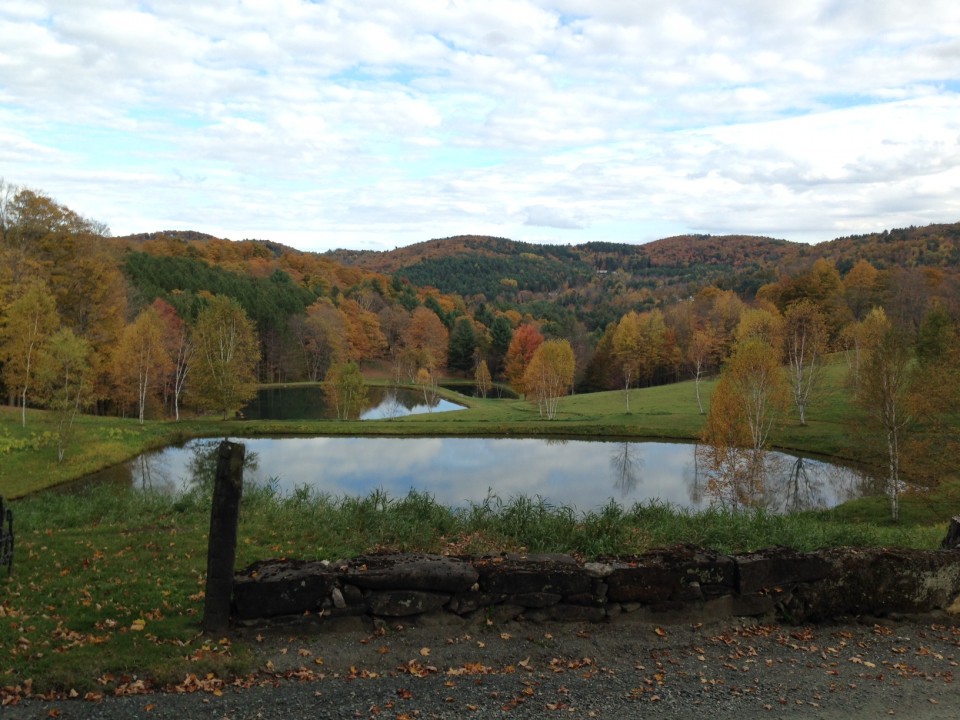 And I got to use my axe. 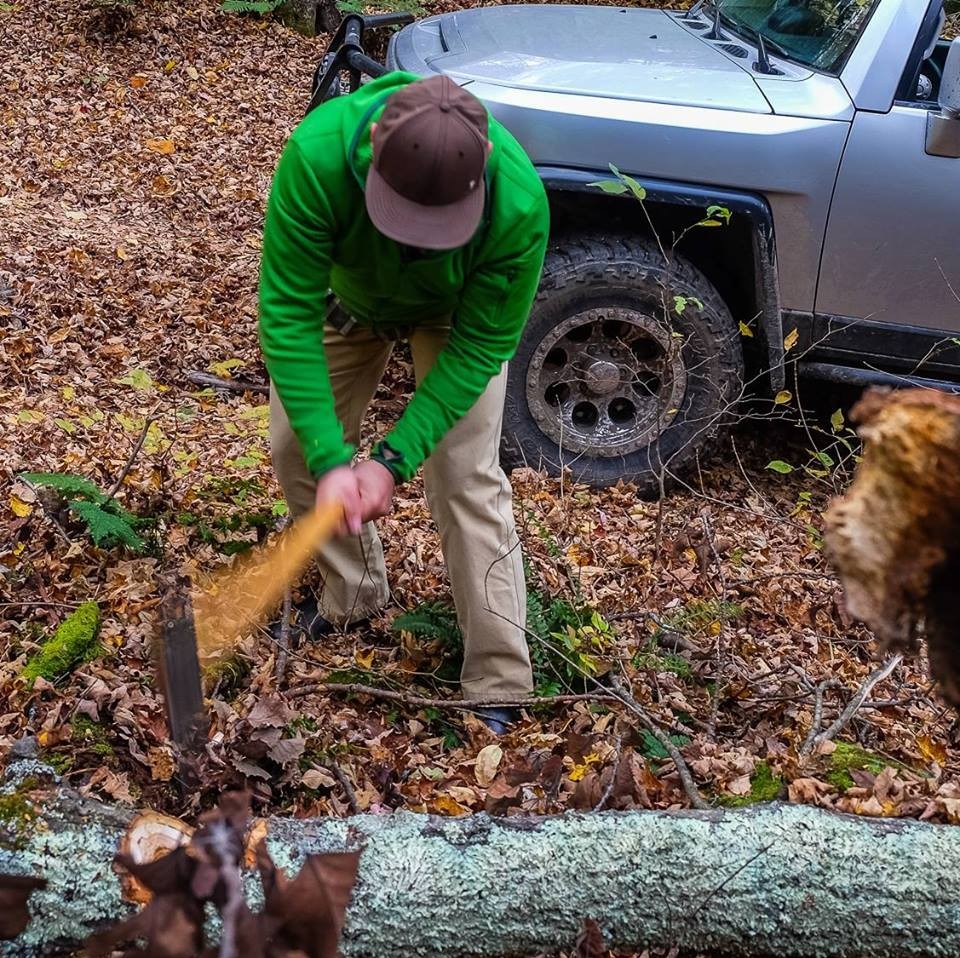 We wound our way back to camp where I got to ogle some of the vehicles people were using for the weekend, and it turns out my inner 17 year old is still hung up on Land Rovers- a long standing crush from seeing one on a daily basis in my hometown during my formative years. 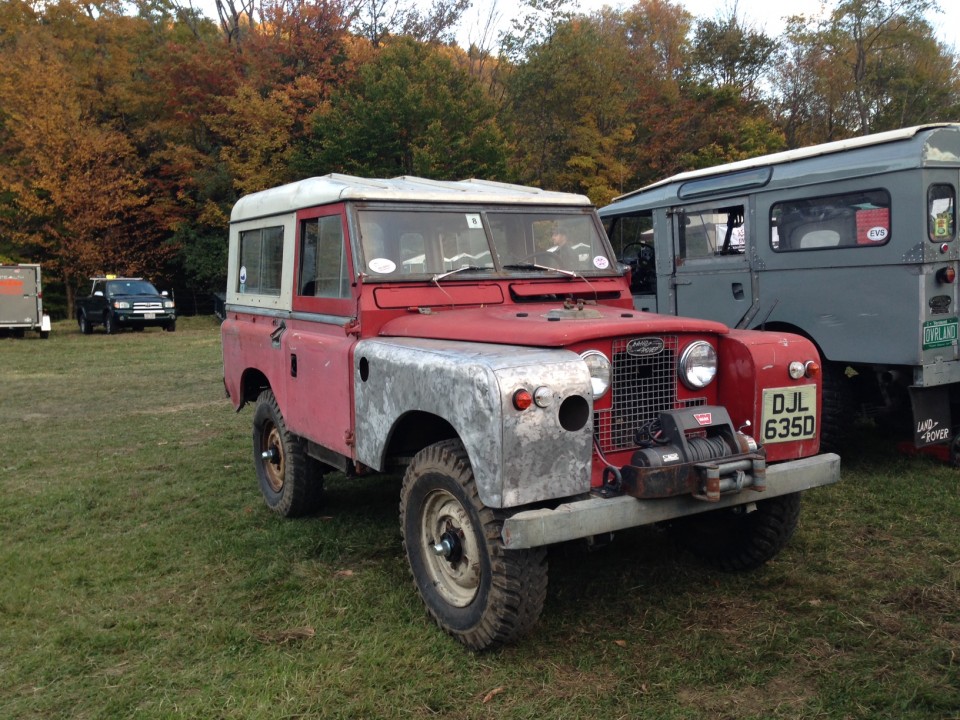 Next year I plan on going again, and if I don’t have my own rig by then I’ll at least be a better co-pilot.

This post is also featured on MTBVT.com.  All good pictures courtesy of Dan Russell.